Crossing the Boarder – Poetry and Film

We are proud to announce our collaboration with film-maker Adam Carr on the production of “My Name Is Swan.” All post-production work including edit, studio camerawork, grade and effects by Nick Franco and Ernie Pay.

“My Name is Swan” was launched to a full house at the East End Film Festival with Q&A hosted by Travis Elborough. This film now embarks on a journey to film festivals across the globe.

The film is based on a poem, written, narrated and starring EEFF Poet in Residence Jan Noble with music by Samuel Kilcoyne and Takatsuna Mukai.

“My Name Is Swan,” declares Jan Noble, “Where I know I’m not wanted, this is where I belong.” His epic tale tells of the edges, the periphery of the city and those on its margins. Adam Carr’s accompanying film, part Night of The Hunter part Robinson in Space takes us along the narrow-ways and rivers star full and bible-black, litter glittering like supernovae. The film is a contemplative meditation on the marginalized. “There are corners of this water known only to itself.” In the still black waters of My Name Is Swan the audience watches its reflection. “My Name Is Swan,” reaffirms Jan Noble to close his epic. 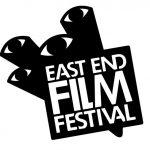